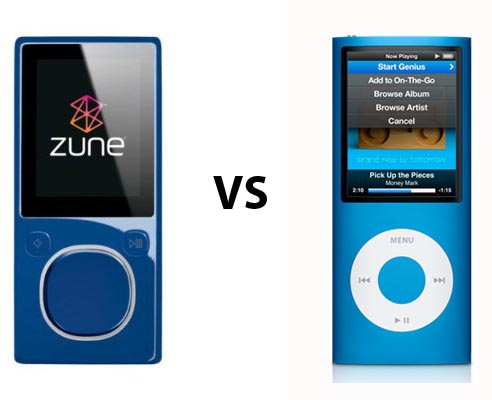 The first thoughts after seeing the new commercials for the iPod nano was that it looked extremely similar to the Zune 4gb/8gb/16gb that has been out since before Christmas 2007.  The Zune Scene forums does a really nice comparison.  First similarity in form factor is they do have the same overall dimensions.  The only really noticeable difference is the nano has a 2.0″ screen while the Zune has a 1.8″ screen.  The resolutions are the same at 320 x 240 so there should not be too much of a difference in quality.  The new nano has an accelerometer which allows it to sense orientation and play movies in the landscape mode.  This is something that the Zune has done from the start with all videos defaulting to landscape without an accelerometer to know its orientation.  It allows the width of the screen to be used while watching videos.  Although at 2.0″ inches it is still a bit small to really watch videos on.  It just allows the nano to have a more “normal” form factor instead of the previous “fat” one that was  wider than tall.

Although, I am bias to the Zune as I have hands on experience with the 8gb and 30gb I feel it is a better product technology wise as it has wifi and an fm radio built in.  This allows flagging and purchase of songs heard on the radio over a wifi connection along with syncing to a music collection.  Microsoft has also upgraded all previous Zune’s to the newest firmware, which is a huge plus for my 30gb Zune.  I do feel Apple used the Zune 4gb/8gb/16gb as a model for the 4th generation nano based on the landscape video viewing mode and similar form factor.  What are your takes?

This entry was posted in Technology. Bookmark the permalink.